Dr Jane Fisher, (University lecturer, environmental scientist with a background in restoration ecology, and the Head of Education at the Centre for Alternative Technology) will be discussing some of CAT’s research to outline the possibility of a zero carbon future.

They are responsible for running and are involved in projects including:
-ZeroCarbonBritain – a series of research r…eports addressing scenarios for reducing the UK’s emissions to zero in 20 years.
https://www.youtube.com/watch?v=S–isZgYKDM

-Coed Gwern – 15 acres of sustainably managed woodland, which is home to a range of courses, as well as being
monitored and managed for biodiversity.

-Dyfi Biosphere – the only UNESCO Biosphere in Wales.

This is a great opportunity to discover more about the practical solutions to the climate crisis; the extent to which different methods and technologies are effective and possible.

Zero Carbon responds to the Paris agreement on climate change at COP21:

“The Paris Agreement is yet another nail in the coffin of the fossil fuel industry, as the world moves towards a zero carbon future. This is a nail that civil society must hammer in. Cambridge University has an incredible opportunity to divest, and do just that.

If a world of two degree warming is incompatible with the polluters’ extractive aims, then the new global target of 1.5 degrees Celsius must surely signal that the game is up. Commentators across the world are heralding the end of the fossil fuel era: for the Guardian it signalled a “transition away from fossil fuels and to a clean energy economy”, while the Economist reflected on “the signal [the agreement] sends to investors: the united governments of the world say that the age of fossil fuels has started drawing to a close”. As we head towards a renewable future, the coal, oil and gas industries have not only lost their social license, they have lost their financial security. Respected organisations from Unilever to the International Investors Group on Climate Change have been warning investors of COP21’s huge implications for fossil fuel investments.

Despite this good news, there is much to be lamented in this agreement. Zero Carbon stands with activists from across the world in condemning the exclusion of rights of indigenous peoples and the lack of financial recourse for developing nations – governments in the Global North have spoken fine words on these issues, but have not matched them with their actions. Most importantly of all, the lack of certainty in this agreement – from its non-binding legal status to the lack of firm dates or percentages – will allow governments to sacrifice the long-term safety of humanity for short-term gain, thereby condemning many cultures, peoples and species to destruction.

It is up to civil society to hold them to their words. The global divestment movement is more important than it has ever been. The fossil fuel industry must give way for a sustainable future. Since governments will not make this happen, the task falls to the rest of society. As the respected environmental writer George Monbiot has commented, this agreement demonstrates the entrenched power of the fossil fuel industry. There is no mention of coal, oil or natural gas in the agreement, yet the burning of these must stop if even the 2°C limit is to be maintained. Science demands this: it is not negotiable.

Institutions such as the University of Cambridge, which take an important leadership role in the future direction of society, must now know in which direction the wind of history is blowing. They cannot stand against it. In light of this, the Working Group set up by the university to investigate ethical investment has a clear mandate: it should recommend divestment from the fossil fuel industry. Not only is it morally right, but it’s also best for Cambridge’s financial status. Otherwise, the University stands to lose a lot of money when government policies kick in and over 80% of fossil fuel reserves have to stay in the ground.

It is up to the Cambridge University family – its students, staff, fellows and all its constituent groups – to make sure this message is heard loud and clear. The future is once again hopeful: we must turn that hope into reality.”

Read more about our march on the Tab: http://thetab.com/uk/cambridge/2015/12/01/student-zero-carbon-campaign-protesters-march-to-tell-university-to-divest-from-fossil-fuels-63280

On November 30th we held a divestment rally in Cambridge as part of People & Planet’s Day of Action against climate change, to mark the beginning of the COP21 Paris Climate Conference. We are calling on the University of Cambridge to divest its £5bn endowment from environmentally destructive and financially insecure fossil fuels. We need to keep 80% of fossil fuels in the ground to avoid catastrophic warming and so it’s time for our politicians and public institutions to act. 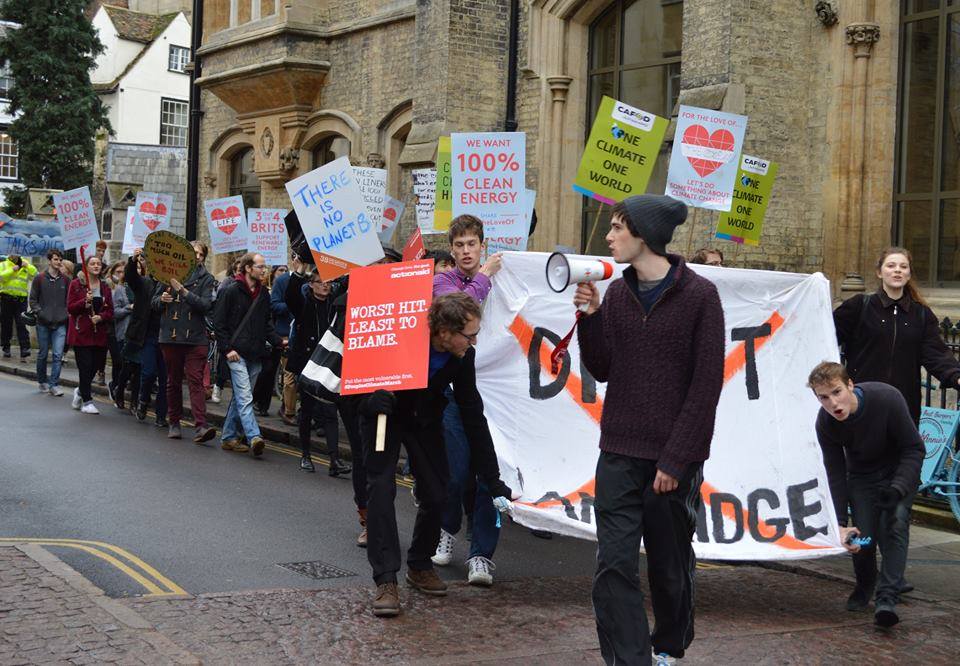 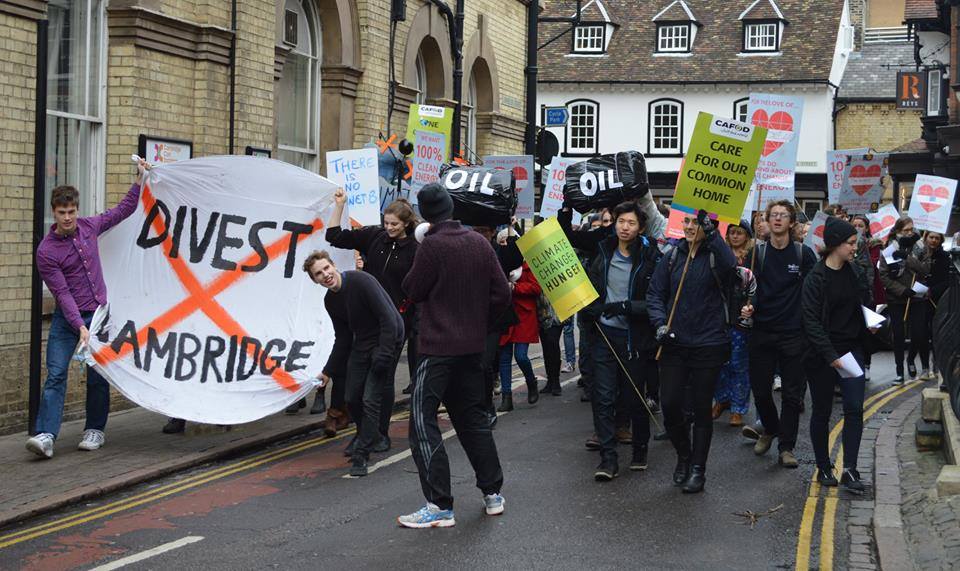 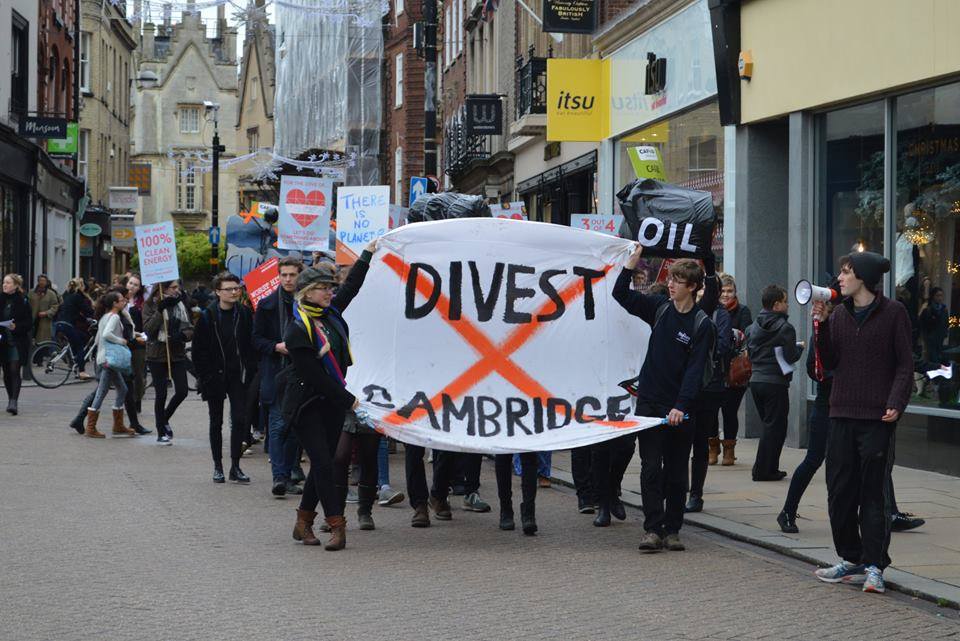 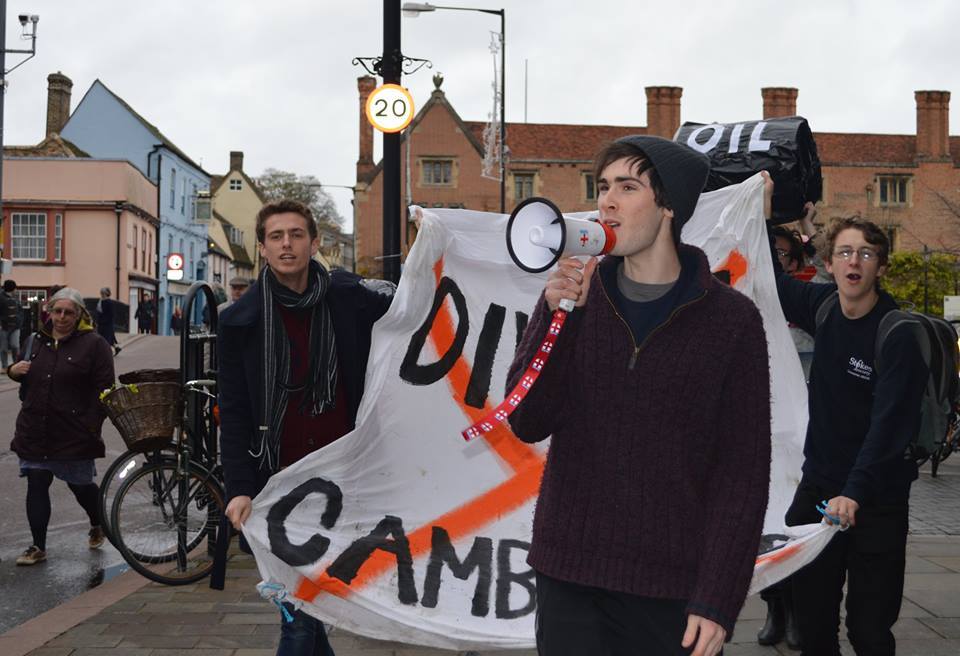 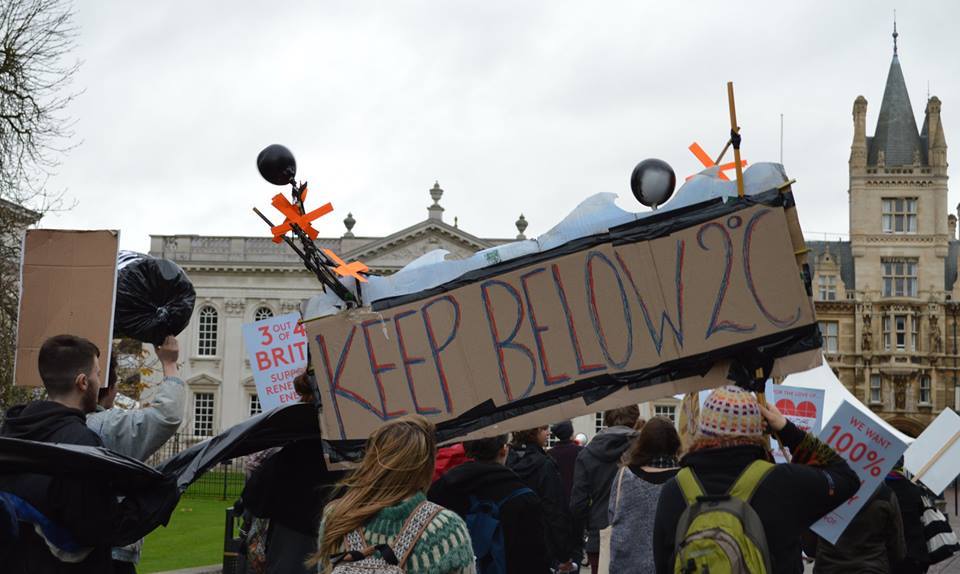 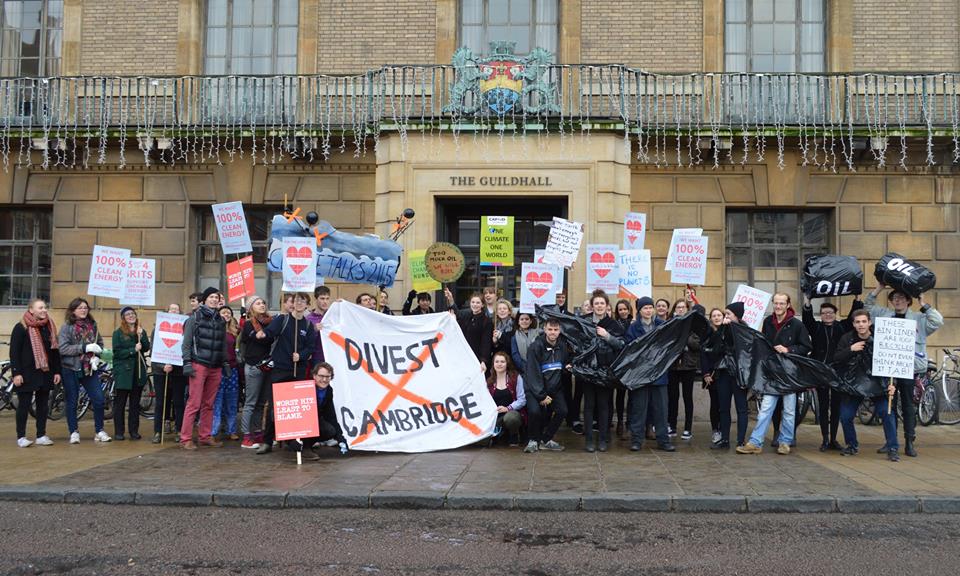 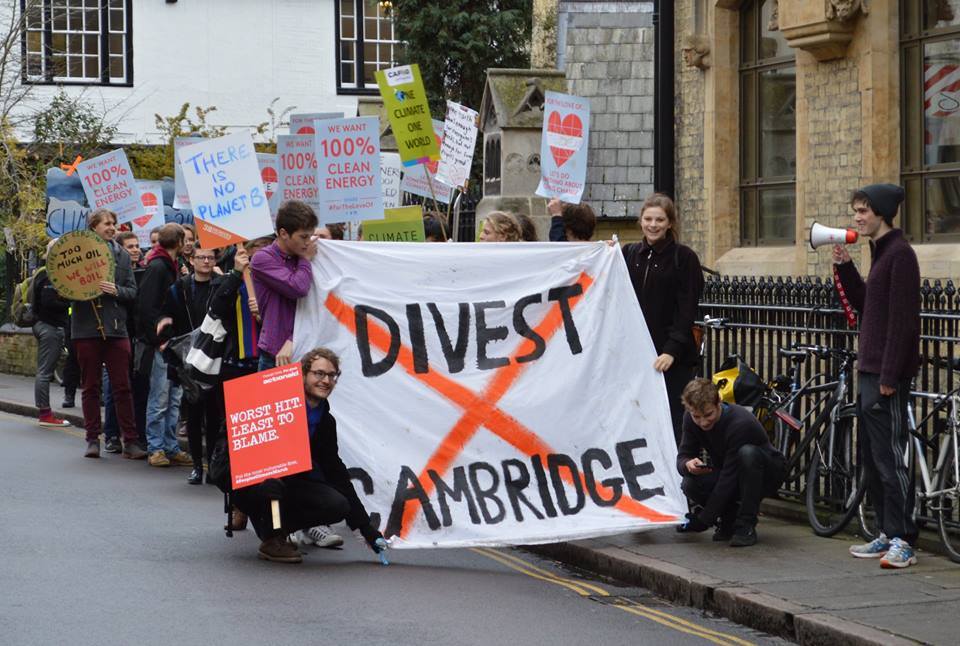 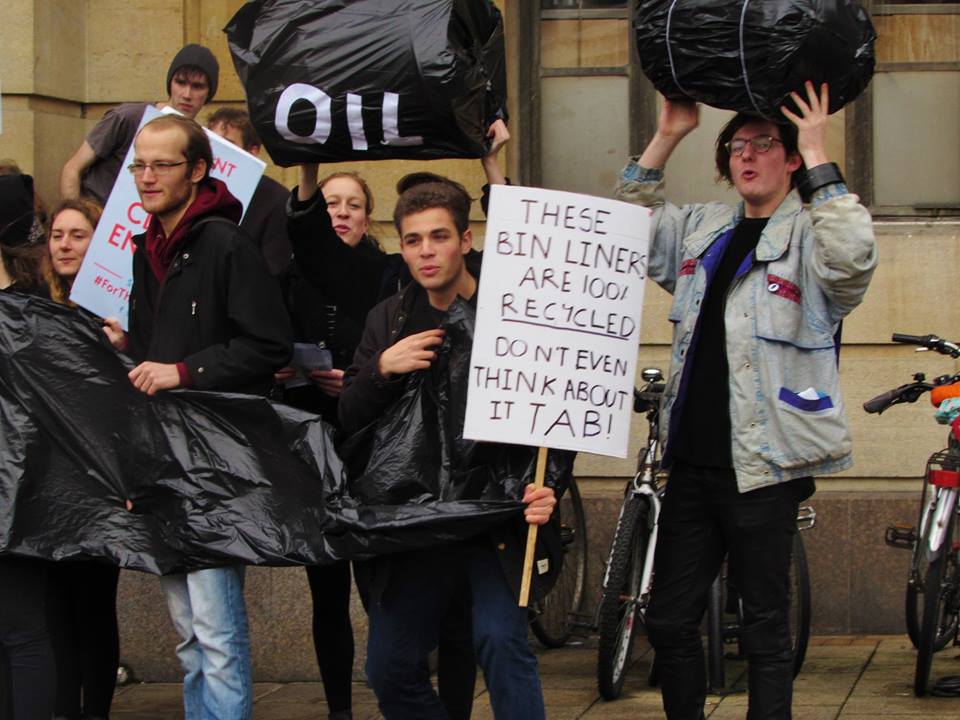 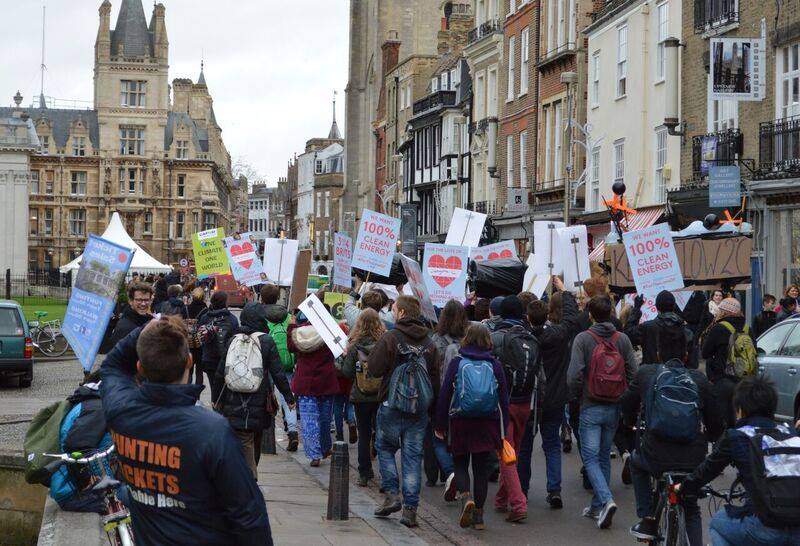 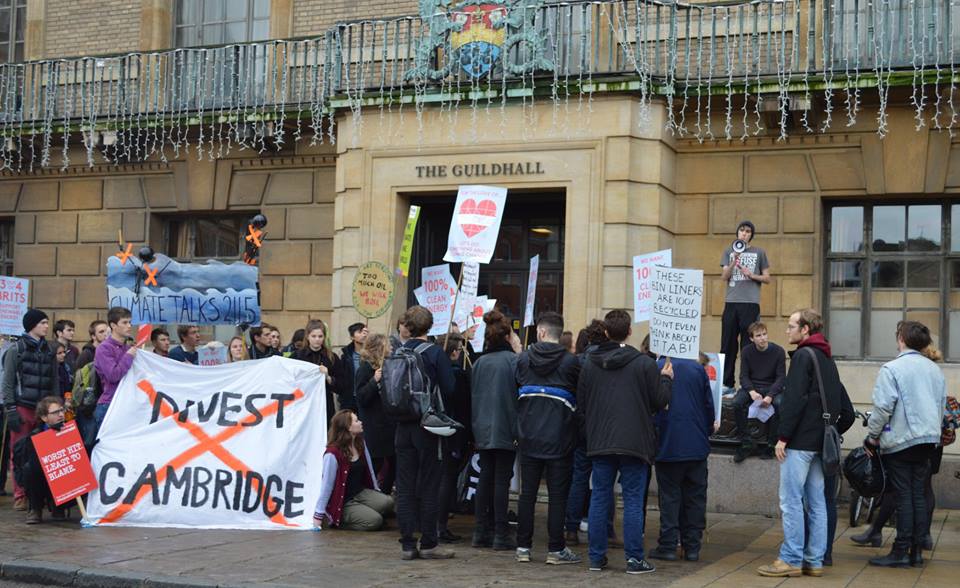 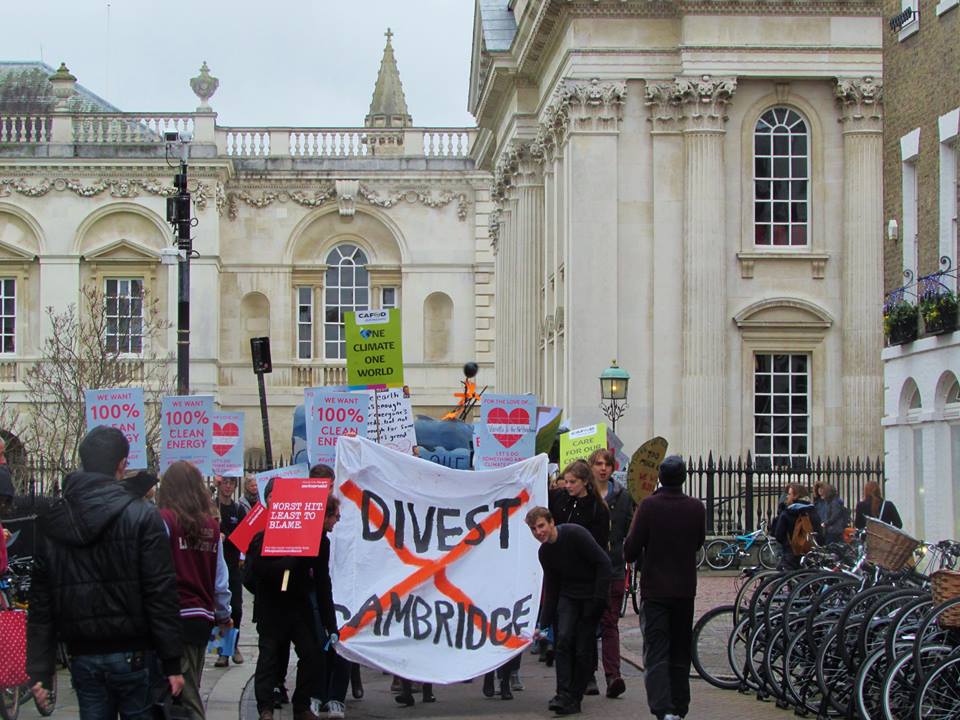 We, Zero Carbon Cambridge, are trying to organise a coach to take us all to London on the 29th November so we can join thousands of other people in the PEOPLE’S CLIMATE MARCH!

We are in the process of getting funding from the local council and Unions, but for this to happen we need to show that we have enough people interested. So, please do sign up to this event. We ask you to pay a £5 deposit (+£1.15 fee – still A LOT CHEAPER THAN THE TRAIN!!) for your seat and then hopefully the rest will be subsidised.

We will update you all on specifics nearer the time!

Thank you so much!

Following a meeting with Cambridge University Students’ Union (CUSU) on November 23rd, the Council almost unanimously voted to support divestment, to support our campaign and to support the right to protest! This is great news for our campaign – the University must listen to a student body speaking with one voice.

Check out this article from BlewsWire for more details! http://blewswire.com/cambridge-students-speaking-one-voice-saying-loudly-cambridge-divest-fossil-fuels/

8B. MOTION TO SUPPORT THE CAMBRIDGE ZERO CARBON SOCIETY

A positive agreement at the COP21 conference in Paris this year is essential. As carbon emissions continue to rise, and we come closer to the 2 degree cut off, it is vital that our leaders come together to make real political change. But what is COP21? What do we need from it? How can we put pressure on our politicians to act? And, if negotiations fail, what next?

Join Zero Carbon Society, *TABITHA SPENCE*, (co-international Secretary of Campaign against Climate Change, co-author of the One Million Climate Jobs project and part of the team at Fossil Free Cambridgeshire) and *SAMA BAKR* (Reclaim the Power and Time to Cycle) on November 17th at 7:30pm where we will be hosting a discussion about COP21, international civil society processes and direct actions in the lead up to COP. Zero Carbon Soc will also be on hand if you have any questions about our campaign and how to get involved.

Read more about the launch of our divestment campaign at the University of Cambridge: 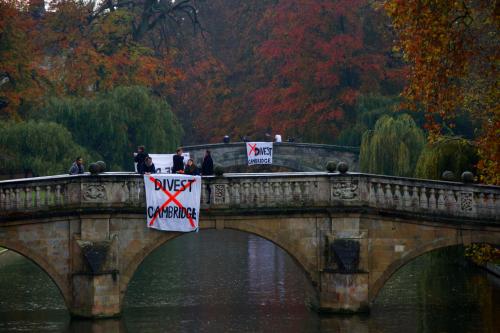 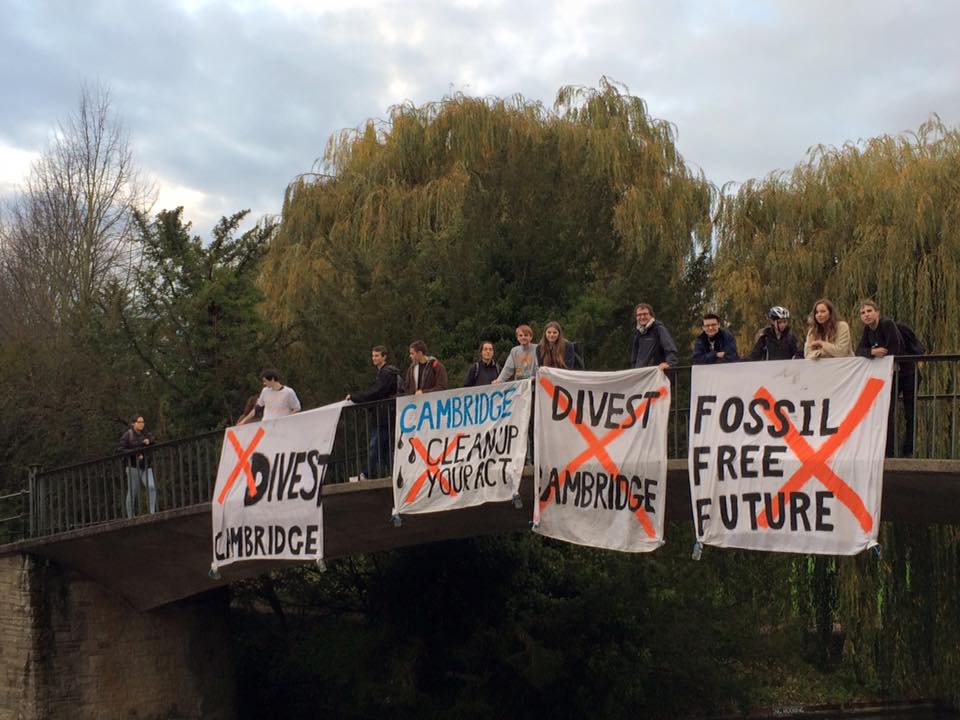 Read more about the launch of our divestment campaign at the University of Cambridge:

The Zero Carbon Society bursts the Cambridge bubble, urging the university to divest from fossil fuels

Cambridge Zero Carbon is teaming up with Magdalene Green & Ethical (who saw that one coming) for a social in Magdalene bar. There will be FREE drinks, the only condition being that you humour us a little about the environment. A chance for Zero Carbonites to get to know each other a bit better, and Magdaleneites to get involved, or simply relax!

I’m sorry that the talk has to be cancelled.

Abstract: Andrew Friend from Department of Geography develops computational models of the effects of global change on terrestrial ecosystems and atmosphere. His current work is particularly concerned with the representation of physiological differences between plant types and species, the representation of competition, and the global-scaledynamics of biogeochemistry-climate interactions. Dr Friend leads the research which is part of the ‘Inter-Sectoral Impact Model Intercomparison Project’ (ISI-MIP) – a unique community-driven effort to bring research on climate change impacts to a new level.

Dr Friend will speak about his work within ISI -MIP project, what implications the recent findings have on the future of climate studies and the potential for this research feeding into climate policy.

Come along for this very special lunchtime talk to find out about the frontiers in climate research! Feel free to bring your own lunch, but light refreshments will be also provided.