Why ‘Fast Feedbacks’ are quite slow and ‘Slow Feedbacks’ might be rather fast.

This paper by Hansen et al. has lots of interesting material on climate sensitivity: http://www.planetwork.net/climate/Hansen2007.pdf
The climate sensitivity is the temperature response of the whole climate to a forcing of greenhouse gases. We know that there are two basic sorts of feedback processes going on in the climate. Firstly we know that as the temperature rises, relative humidity will stay roughly constant and thus absolute humidity will increase. This leads to more water vapour in the air; and water vapour is a strong greenhouse gas. Higher temperatures also has an ambigous (to this author) effect on clouds. The sum of all these atmospheric effects yields the ‘Charney’ definition of the climate sensitivity which is the equilibrium temperature rise from a doubling in CO2 concentrations; assuming that the land albedo and carbon (CO2/Methane) sinks stay constant. (of course they don’t stay constant; we will come to this). This has been argued to be close to 3Celsius (3C) for a doubling of CO2 or 0.75C/(W/m2)*. [*A doubling of CO2 gives an increase in radiative forcing of about 4W/m2, so multiply the C/(W/m2) by 4 to get the temperature change for doubling CO2] 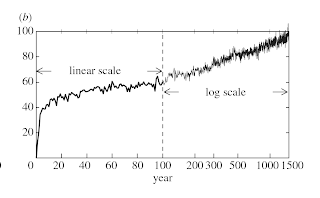 Now to the `slow’ feedbacks, namely the ice-albedo changes from melting ice and carbon dioxide and methane releases. How fast are they? And how serious?

In answer to the ‘how fast’, the simple answer is we don’t know. Traditionally, ice-melting has been seen as a slow process. But the old models may not be correct; as was shown by record melt rates in the early 21st century. Paleotological evidence points to times between the ice ages where sea levels have risen metres in a single decade. Hansen suggests that the relative stability of our epoch may have been to do with the fact that there was a zone of comfort between the melting of the great Eurasian and North American icesheets and the melting of Greenland and West Antarctica.
The second question is ‘how much’. One approach is bottom up: you add carbon cycle causation to the greenhouse effect.
If the effect of temperature on radiative forcing is given by s and the effect of radiative forcing on temperature by g, the feedback relation is simply:
DT(with feedback)/DT(without feedback)= 1/(1-g*s). This amounts to 15-78% more warming (Cox and Scheffer 2007):

the feedback of global temperature on atmospheric CO2 will
promote warming by an extra 15–78% on a century-scale.
This estimate may be conservative as we did not account for
synergistic effects of likely temperature moderated increase
in other greenhouse gases.

A cursory inspection of this graph of greenhouse gas forcing shows:
a) A very high correlation (suggesting a strong link between greenhouse gas concentrations and warming)
b) Episodes of very rapid temperature change and ice melt (over the time scale of decades – e.g. the ‘Younger Dryas’ event.
c) a correlation between the two variables of about 3C/(W/m2)
Now the temperature shifts at the poles by about twice the global temperature change, we can imply a correlation of about 1.5C/(W/m2).
This is about double the ‘fast feedback’ 0.75C/(W/m2) predicted byclimate models and would imply a temperature change of six celsius for a doubling in CO2, twice what we have already found. But this is not the same quantity. It’s not clear that the figure found by dividing the standard deviation of the Temperature graph by that of the Forcing graph is the quantity that Hansen asserts it is and that we want. What is going on?
So, following Scheffer and Cox, here is some basic theory of feedback loops…
Let’s assume that Forcing (in W/m2) leads to temperature increases in Celsius (C). Let’s assume both processes are linear:
g
Forcing –> Temp
\ /
< --
s
If we denote the initial change in forcing by f (before feedbacks)
and the final change in temperature by T (after feedbacks)
This gives T/f=g+g(sg)+g(sg)*(sg)…= g/(1-s*g)
What about the other direction?
s
Temp –> Forcing
\ /
< --
g

So ice core evidence provides us with information about the *strength of the Temperature-CO2 feedback* not on the overall greenhouse effect, including feedbacks.

started the whole process off. If the huge temperature change and big CO2 increase was the result of a huge temperature forcing, this would imply that the feedback from temperature to CO2 was huge, but that the greenhouse effect was small.
Hansen’s paper provides some very interesting evidence of the magnitude of the forcings from precession, but does not go so far as to come to an estimate of the ‘equivalent’ forcing implied by the Milankovich cycles. It is clear that the forcing on a global sense is small, but as Hansen points out, the effect at the ice age boundary is larger.
My conclusion supports the methodology of Cox and Sheffer over that of Hansen. However, it suggests that it should be easy to extend Cox and Scheffer to include
other greenhouse gases and ice-albedo effects (by using the data that Hansen himself uses).
What is needed is to have a rough estimate of the magnitude of the original ‘equivalent temperature’ forcing (already including *local* ice-albedo feedbacks – since an insolation increase at the polar rim where ice is melting is clearly very effect; but *excluding* global feedbacks) that started the whole process off.
Hansen’s paper hints at it but does not profer an estimate. His guess is probably a bit better than mine. Perhaps he should guess. An approximate answer to the exactly relevant question may be as much use as the exact answer to an approximately relevant question.
Category: Uncategorized